The Story of Saint Lawrence

This famous martyr of Rome lived in the second century. He was one of seven deacons who were in charge of giving help to the poor and the needy. Then big trouble started and the troublemakers who did not like Christians decided to kill Pope St.Sixtus II. As they took the Pope away for execution (to chop off his head), Lawrence followed him weeping. “Father, where are you going without your deacon?” The Pope answered, “I am not leaving you, my son, in three days you will follow me.” Full of joy, Lawrence gave to the poor the rest of the money he had with him. He even sold expensive church vessels so he would have more money to give away. The prefect of Rome, a greedy man, thought the Church had a great fortune hidden away. He ordered Lawrence to bring the Church’s treasure to him. The saint said he would, in three days. Then he went through the city and gathered together all the poor and sick people supported by the Church. He showed them to the prefect and said: “These people are the Church’s treasure.” The prefect was furious. In his anger he asked them to kill Lawrence slowly so he would suffer more. The saint was tied on top of an iron grill over a slow fire that roasted him. God gave him so much strength and joy that Lawrence joked with the judge saying “Turn me over”. Before he died, he prayed that the city of Rome might be converted to Jesus. He prayed that the Catholic faith would spread all over the world. 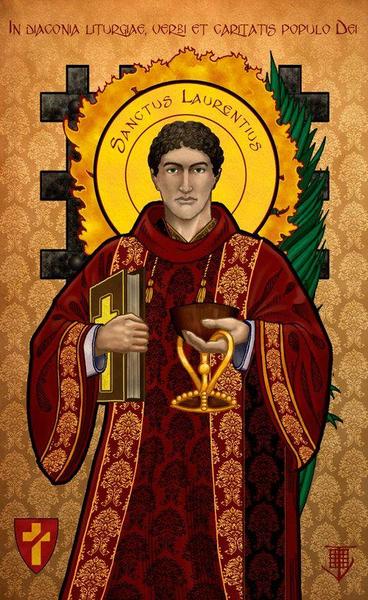 Lawrence died on August 10, 258. His feast spread throughout Italy and northern Africa. Emperor Constantine built a beautiful basilica in Lawrence’s honour. St. Lawrence is among the saints mentioned in the First Eucharistic Prayer at Mass. He is the patron saint of school children, poor people, cooks and comedians to name but a few. 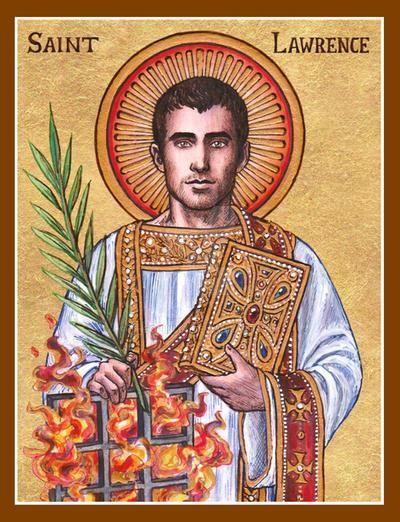 O Generous patron of the Church’s poor, St. Lawrence, pray to the One God, Father, Son and Holy Spirit that all the poor of the Church in need in every corner of the world may feel the effect of the love of their brothers and sisters who seek to help them.

Deliver the Church from the greed and envy of the powerful and protect her rights and property so that she may serve the needy in freedom, giving them good things for soul and body.

May we come some day with all those whom we helped on earth to the bright mansions of heaven where we will enjoy the riches of God’s house and the company of the Saviour who lives and reigns forever and ever.