↓
Home→News→Life of a Saint: St Maria Goretti (with Videos)

Born on October 16 1890 in Corinaldo, in the Ancona Province in Italy, her farmworker father moved his family to Ferrier di Conca, near Anzio. When he died of malaria, Maria’s mother had to struggle to feed her children.

Maria’s mother, brothers, and sisters worked in the fields while she cooked, sewed, kept the house clean, and watched her youngest sister Teresa. Though the family’s circumstances were extremely difficult, they were very close and loved God.

On July 5, 1902, Maria was sitting outside the steps of her home sewing her 18-year-old brother or neighbor -it is unclear which – Alessandro’s shirt while he threshed beans in the barnyard. As she concentrated on her sewing, Alessandro surprised her and grabbed her from her steps. When he tried to rape her, Maria cried that it was a mortal sin and warned he would go to hell.

When Alessandro persisted, she fought him and screamed, “No! It is a sin! God does not want it!” At her words, Alessandro began to choke her and she said she would rather die than submit. Upon hearing her words, Alexander pulled out a knife and stabbed her eleven times. When she attempted to reach the door, he stabbed her three more times then fled.

Teresa woke to the sounds of her sister’s cries and began to cry. Maria’s family returned home and found her bleeding on the floor. They quickly took her to the nearest hospital in Nettuno, where she underwent surgery without anesthesia.

Unfortunately, her wounds were beyond the surgeon’s ability to help. Halfway through the surgery, the man asked her, “Maria, think of me in Paradise.”

As she lay on the table, she looked up at him and said, “Well, who knows which of us is going to be there first?”

She did not realize how terrible her situation was, and the surgeon replied, “You, Maria.”

She said, “Then I will think gladly of you.” She also mentioned concerns for her mother. The next day, Maria forgave Alessandro and said she wanted to see him in Heaven with her. She died that day while looking upon an image of the Virgin Mary and holding a cross to her chest.

Shortly after Maria’s family discovered her, Alexander was captured and questioned. He admitted Maria was a physical virgin as he was unable to assault her and he was sentenced to thirty years. He also admitted he had attempted to persuade her to accompany him to bed on several occasions in the past and had attempted to rape her before.

Alessandro remained unrepentant for his actions until he had a dream that he was in a garden. Maria was there and gave him lilies, which immediately burned in his hands. When he woke, he was a changed man. He repented his crime and living a reformed life. When he was released 27-years-later, he went directly to Maria’s mother and begged her forgiveness, which she gave, saying, “If my daughter can forgive him, who am I to withhold forgiveness?”

Maria Goretti was beatified by Pope Pius XII in a ceremony at Saint Peter’s Basilica on April 27, 1947.

Three years later, on June 24, 1950, Maria was declared a saint and Alessandro was present in the St. Peter’s crowd to celebrate her canonization. He later became a laybrother of the Order of Friars Minor Capuchin, where he lived in a monastery and worked as its receptionist and gardener until his death.

Saint Maria is called a martyr because she fought against Alessandro’s attempts at sexual sin; however, the most important aspects of her story are how she forgave her attacker – her concern for her enemy extending even beyond death  – and the miracle her forgiveness produced in his life. 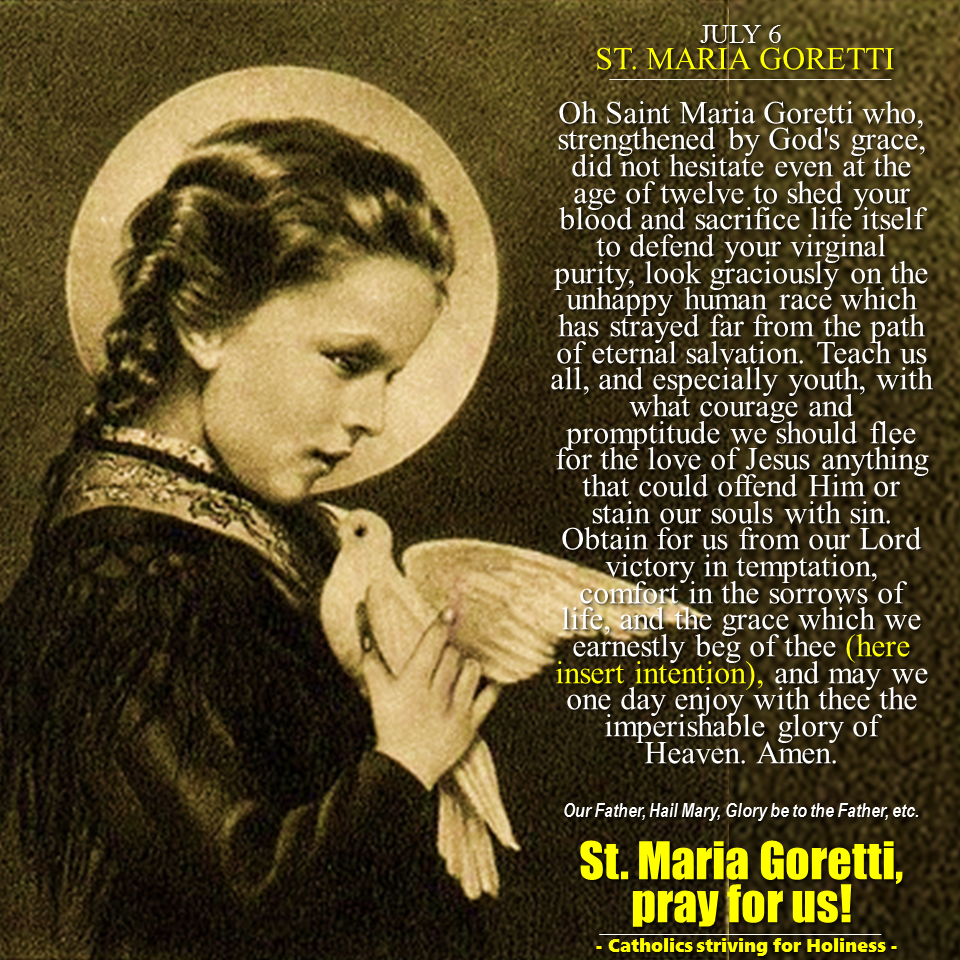