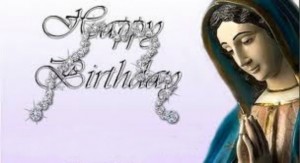 The Nativity of the Blessed Virgin Mary

The Feast of the Nativity of the Blessed Virgin Mary was celebrated at least by the sixth century, when St. Romanos the Melodist, an Eastern Christian who composed many of the hymns used in the Eastern Catholic and Eastern Orthodox liturgies, composed a hymn for the feast. The feast spread to Rome in the seventh century, but it was a couple more centuries before it was celebrated throughout the West.

The source for the story of the birth of the Blessed Virgin Mary is the Protoevangelium of James, an apocryphal gospel written about A.D. 150. From it, we learn the names of Mary’s parents, Joachim and Anna, as well as the tradition that the couple was childless until an angel appeared to Anna and told her that she would conceive. (Many of the same details appear also in the later apocryphal Gospel of the Nativity of Mary.)

The traditional date of the feast, September 8, falls exactly nine months after the feast of the Immaculate Conception of Mary. Perhaps because of its close proximity to the feast of the Assumption of Mary, the Nativity of the Blessed Virgin Mary is not celebrated today with the same solemnity as the Immaculate Conception. It is, nonetheless, a very important feast, because it prepares the way for the birth of Christ.