What are the origins of All Saints and All Souls Day. Are these linked with paganism and Halloween? 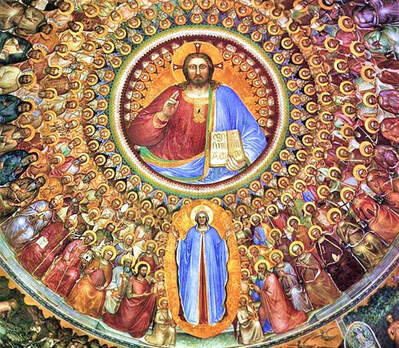 Let us first address the Feast of All Saints. The exact origins of this celebration are uncertain, although, after the legalization of Christianity in 313, a common commemoration of Saints, especially the martyrs, appeared in various areas throughout the Church. For instance in the East, the city of Edessa celebrated this feast on May 13; the Syrians, on the Friday after Easter; and the city of Antioch, on the first Sunday after Pentecost. Both St. Ephrem (d. 373) and St. John Chrysostom (d. 407) attest to this feast day in their preaching. In the West, a commemoration for all the saints also was celebrated on the first Sunday after Pentecost. The primary reason for establishing a common feast day was because of the desire to honor the great number of martyrs, especially during the persecution of Emperor Diocletion (284-305), the worst and most extensive of the persecutions. Quite supply, there were not enough days of the year for a feast day for each martyr and many of them died in groups. A common feast day for all saints, therefore seemed most appropriate.

In 609, the Emperor Phocas gave the Pantheon in Rome to Pope Boniface IV, who rededicated it on May 13 under the title St. Maria ad Martyres (or St. Mary and All Martyrs). Whether the Holy Father purposefully chose May 13 because of the date of the popular celebration already established in the East or whether this was just a happy coincidence is open to debate.

According to an early Church historian, John Beleth, Pope Gregory IV (827-844) officially declared Nov. 1 the Feast of All Saints, transferring it from May 13. However, Sicard of Cremona (d. 1215) recorded that Pope Gregory VII (1073-85) finally suppressed May 13 and mandated Nov.1 as the date to celebrate the Feast of All Saints. In all, we find the Church establishing a liturgical feast day in honor of the saints independent of any pagan influence.

Now for the pagan connection: Nov. 1 marked Samhain, the beginning of the Celtic winter. (The Celts lived as early as 2,000 years ago in England, Scotland, Wales, Ireland, and northern France.) Samhain, for whom the feast was named, was the Celtic lord of death, and his name literally meant “summer’s end.” Since winter is the season of cold, darkness and death, the Celts soon made the connection with human death. The eve of Samhain, Oct. 31, was a time of Celtic pagan sacrifice, and Samhain allowed the souls of the dead to return to their earthly homes that evening. Ghosts, witches, goblins, and elves came to harm the people, particularly those who had inflicted harm on them in this life. Cats too were considered sacred because they had once been human beings who had been changed as a punishment for their evil deeds on this earth.

To protect themselves from marauding evil spirits on the eve of Samhain, the people extinguished their hearth fires and the Druids (the priests and spintual teachers of the Belts) built a huge new year’s bonfire of sacred oak branches. The Druids offered burnt sacrifices â crops, animals, even humans â and told fortunes of the coming year by examining the burned remains. People sometimes wore costumes of animal heads and skins. From this new fire, the home hearths were again ignited.

Particular ethnic groups developed their own lore which was merged with the celebration. In Ireland, people held a parade in honor of Muck Olla, a god. They followed a leader dressed in a white robe with a mask from the head of an animal, and begged for food. (Ireland is also the source of the jack-o’lantern fable: A man named Jack was not able to enter heaven because of his miserliness and he could not enter hell because he played practical jokes on the devil; so he was condemned to walk the earth with his lantern until Judgment Day.)

The Scots walked through fields and villages carrying torches and lit bonfires to ward off witches and other evil spirits.

In Wales, every person placed a marked stone in the huge bonfire. If a person’s stone could not be found the next morning, he would die within a year.

Besides the Celtic traditions in place, the Roman conquest of Britain in AD 43 brought two other pagan feasts: Feralia was held in late October to honor the dead. Another Autumn festival honored Pomona, the goddess of fruits and trees; probably through this festival, apples became associated with Halloween. Elements of these Roman celebrations were combined with the Celtic Samhain.

With the spread of Christianity and the establishment of All Saints Day, some of these pagan customs remained in the English speaking world for All Hallows Eve (or Halloween, All Saints Eve), perhaps at first more out of superstition and later, more out of fun. Nevertheless, All Saints Day clearly arose from genuine a Christian devotion.

Along with the Feast of All Saints developed the Feast of All Souls. The Church has consistently encouraged the offering of prayers and Mass for the souls of the faithful departed in Purgatory. At the time of their death, these souls are not perfectly cleansed of venial sin or have not atoned for past transgressions, and thereby are deprived of the Beatific Vision. The faithful on earth can assist these souls in Purgatory in attaining the Beatific Vision through their prayers, good works and the offering of Mass.

In the early days of the Church, the names of the faithful departed were posted in Church so that the community would remember them in prayer. In the 6th century, the Benedictine monasteries held a solemn commemoration of deceased members at Whitsuntide, the days following Pentecost. In Spain, St. Isidore (d. 636) attested to a celebration on the Saturday before Sexagesima Sunday (the second Sunday before Lent, the eighth before Easter in the old calendar). In Germany, Widukind, Abbot of Corvey (d. 980) recorded a special ceremony for the faithful departed on Oct. 1. St. Odilo, the Abbot of Cluny (d. 1048), decreed for all of the Cluniac monasteries that special prayers be offered and the Office of the Dead sung for all of the souls in Purgatory on Nov. 2, the day after All Saints. The Benedictines and Carthusians adopted that same devotion, and soon Nov. 2 was adopted as the Feast of All Souls for the whole Church.

Other customs have arisen over time in the celebration of All Souls Day. The Dominicans in the 15th century instituted a custom of each priest offering three Masses on the Feast of All Souls. Pope Benedict XIV in 1748 approved this practice, and it rapidly spread throughout Spain, Portugal and Latin America. During World War I, Pope Benedict XV, recognizing the number of war dead and the numerous Masses that could not be fulfilled because of destroyed Churches, granted all priests the privilege of offering three Masses on All Souls Day: one for the particular intention, one for all of the faithful departed, and one for the intentions of the Holy Father.

Other customs have developed regarding All Souls. In Mexico, relatives make garlands, wreathes and crosses of real and paper flowers of every color to place on the graves of deceased relatives the morning of All Souls. The family will spend the entire day at the cemetery. The pastor will visit the cemetery, preach and offer prayers for the dead and then bless the individual graves. “Skeleton” candy is given to the children.

Similar practices occur in Louisiana. The relatives whitewash and clean the tombstones and prepare garlands, wreathes and crosses of real and paper flowers to decorate them. In the afternoon of All Saints, the priest processes around the cemetery, blessing the graves and reciting the Rosary. Candles are lit near the graves at dusk, one for each member of the deceased. On All Souls day, Mass is usually offered at the cemetery.

In the Middle Ages, superstitious belief, probably influenced from Celtic paganism, held that the souls in purgatory appeared on All Souls Day as witches, toads, goblins, etc. to persons who committed wrongs against them during their lives on earth. For this reason, some ethnic groups also prepared food offerings to feed and to appease the spirits on this day. These practices are probably remnants of the Celtic Samhain festivities.

Nevertheless, All Souls Day as well as All Saints Day are rooted in Christian belief and arose in this life of the Church through a healthy spirituality, despite some pagan trappings that may have survived and have remained attached to their celebration.